As usual, our summary has everything individuals and businesses need to know about the 2022/23 tax year, including rates and allowances.

The marriage allowance permits certain couples, where neither pays tax at more than the basic rate, to transfer £1,260 of their personal allowance to their spouse or civil partner.

The marriage allowance reduces the recipient’s tax bill by up to £250 in the tax year (6 April to 5 April the next year). The marriage allowance was first introduced in 2015/16, and some couples are entitled to claim but have not yet done so. You can backdate your claim to include any tax year since 5 April 2017 that you were eligible for Marriage Allowance where the entitlement conditions are met.

The basic tax rate remains at 20%, and the 40% band applies for taxable income over £50,270 for those who are entitled to the full personal allowance.

The table below shows the tax rates you pay in each band if you have a standard Personal Allowance of £12,570.

The tax on income (other than savings and dividend income) is different for taxpayers who are resident in Scotland from taxpayers resident elsewhere in the UK. The Scottish income tax rates and bands apply to income such as employment income, self-employed trade profits and property income.

The Savings Allowance applies to savings income and income such as bank and building society interest. The available allowance in a tax year depends on the individual’s marginal rate of income tax.

Some individuals qualify for a 0% starting rate of tax on savings income up to £5,000. However, the rate is not available if taxable non-savings income (broadly earnings, pensions, trading profits and property income, less allocated allowances and reliefs) exceeds £5,000.

The first £2,000 of dividends is chargeable to tax at 0% (the Dividend Allowance). Dividends received above the allowance are taxed at the following rates:

Dividends within the allowance still count towards an individual’s basic or higher rate band and so may affect the rate of tax paid on dividends above the Dividend Allowance.

To determine which tax band dividends fall into, dividends are treated as the last type of income to be taxed.

To find out more, please visit the government’s website by clicking here.

There is an overall limit on the amount of an individual’s tax-relieved annual pension savings or accrual which includes employer contributions. This
is known as the annual allowance and the standard annual allowance remains £40,000 for 2022/23.

The Primary Threshold and Lower Profits Limit (the point at which employees and the self-employed start paying National Insurance contributions (NICs)) will increase to bring them in line with the income tax personal allowance of £12,570.

This will mean working people will be able to earn £12,570 tax and National Insurance free, an increase of £2,690 in cash terms.

The National Living Wage is increasing by 6.6% for individuals aged 23 and over. The Government has announced increases in other NMW rates based on the recommendation of the Independent Low Pay Commission.

The Making Tax Digital (MTD) regime is based on businesses being required to maintain their accounting records in a specified digital format and
submit extracts from those records regularly to HMRC.

It had been expected that sole trader businesses and landlords with business income of more than £10,000 per annum would be required to enter the MTD regime for income tax purposes from 6 April 2023. However, HMRC recently announced that this will be deferred until 6 April 2024.

HMRC has previously announced that MTD for corporation tax will not be mandated before 2026.

The 19% rate will become a small profits rate payable by companies with profits of £50,000 or less.

Companies with profits between £50,000 and £250,000 will pay tax at the main rate reduced by a marginal relief, providing a gradual increase in the effective corporate tax rate.

Most corporate and unincorporated businesses are able to utilise a £200,000 annual investment allowance (AIA) to claim 100% tax relief on their qualifying expenditure on plant and machinery.

Between 1 April 2021 and 31 March 2023, companies investing in qualifying new plant and machinery will benefit from new first-year capital allowances.

Under this measure, a company is allowed to claim:

This relief is not available for unincorporated businesses.

100% first-year allowances for zero-emission cars and zero-emission goods vehicles have been extended by four years from April 2021.

CO2 emission thresholds have been amended from April 2021. These determine the rate of capital allowances available through which the capital expenditure for business cars can be written down.

A new tax will be applied from 1 April 2022 on company profits derived from UK residential property development. The tax will be charged at 4% on profits exceeding an annual allowance of £25 million. For companies that are part of a group, the £25 million allowance will be allocated by the group between its companies.

Research and Development (R&D) tax reliefs for companies will be reformed to:

These changes will take effect from April 2023.

There are changes to the current rates of CGT, which remain at 10%, to the extent that any income tax basic rate band is available and 20% thereafter. Higher rates of 18% and 28% apply for certain gains, mainly chargeable gains on residential properties except for any element that qualifies for Private Residence Relief.

Two specific types of disposal potentially qualify for a 10% rate up to a lifetime limit for each individual:

An additional nil rate band, called the ‘residence nil rate band’ (RNRB), which has been increased in stages and is now £175,000 for deaths, is also frozen at the current level until 5 April 2026.

A taper reduces the amount of the RNRB by £1 for every £2 if the ‘net’ value of the death estate is more than £2 million. Net value is after deducting permitted liabilities but before exemptions and reliefs. This taper will also be maintained at the current level. 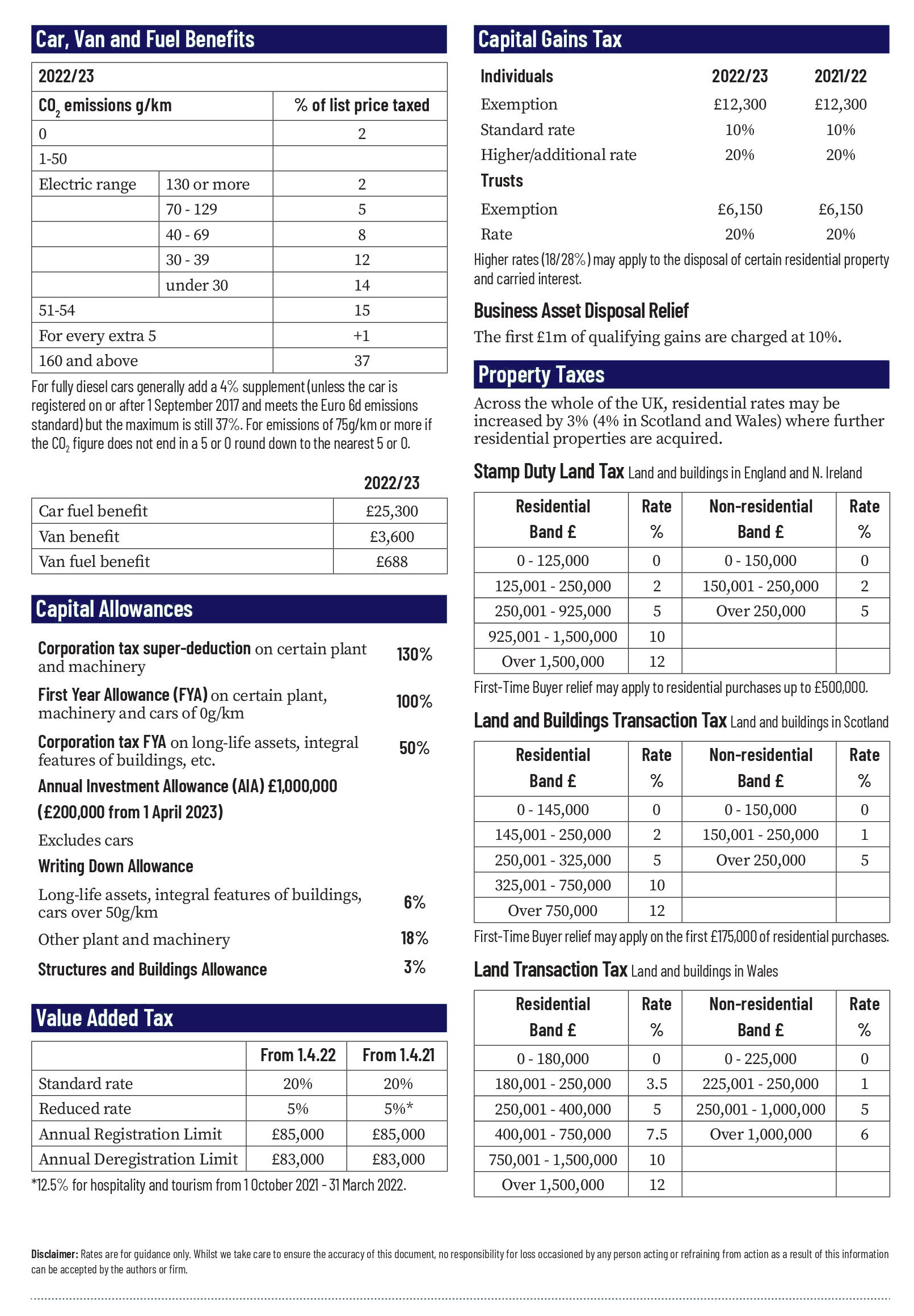 The latest NIC and tax changes arriving in April 2022

Breaking his pledge made in 2019, Boris Johnson unveiled his plans to increase National Insurance and Dividend Taxes on 7…

“Both during the companies’ initial set up and since that time, MyAccountant have shown first class care and diligence in looking after my personal and my business accounts. As a result, I have been ...

“I set up my consulting company after completing my work for London2012 and chose MyAccountant. They effectively supported me during the company set up and answered initial queries in an informative and prompt manner. ...

“I have been using MyAccountant for seven years now and can highly recommend their services.  I use them for both my company accounts and personal finances and find their knowledge, professionalism and attention to ...

“I have been with MyAccountant for many years and they have supported me through a range of different business needs.  From my being a marketing consultant to my running a small publishing company, and ...

Fill out our registration form